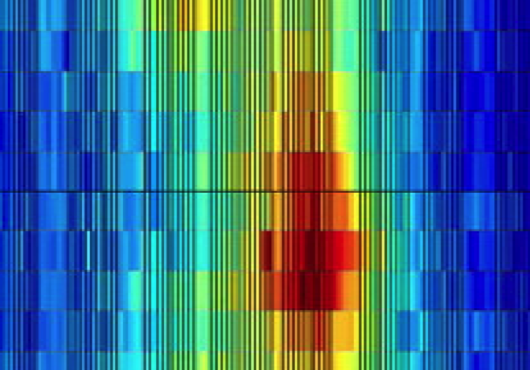 There are several established techniques that allow the measurement of strain in materials and structures on a macro scale such as X-ray diffraction and neutron diffraction. However, these are of limited value in the understanding of the microscopic, or nanoscale, strain characteristics that may help to improve the design of, or to understand failure of such small structures. With recently developed techniques it is now possible to reliably measure stress and strain on the nanoscale. This note gives a brief overview of the SEM-based electron backscattered diffraction (EBSD) and confocal Raman microscopy (CRM) methods to determine strain in an indented silicon sample. Further details can be obtained in the published work of Vaudin et al.

EBSD analysis in the SEM is an accepted technique and is used in many laboratories to determine microstructural characteristics of many types of samples. This technique typically provides grain and grain boundary orientation as well as grain lattice rotations or bending. Information about grain identity based on lattice parameters and/or chemistry can also be obtained. The HR-EBSD technique (1) goes much further in providing deeper insights into the stress and strain state of the analyzed region, supplying the full strain tensor and rigid body rotations.

This information is unique to HR‐EBSD and is not available in standard commercial EBSD analysis. Strain analysis by EBSD methods relies on the changes in elastic strain and lattice rotation in the sample, which cause consequent small shifts in zone axes and other features over the entire diffraction pattern in a systematic way.

If an area of the sample is considered to be ‘strain‐free’ or nearly so, then its EBSD pattern can be used as a reference and other patterns can be compared to it, and any changes in neighbouring areas may be ascribed to changes in the strain state of the sample.

Confocal Raman microscopy is based on standard confocal optical microscopy where a laser is used to illuminate a sample and light, which is reflected back from the sample through a pinhole aperture, is acquired from a single point on the sample surface rather than from the entire illuminated specimen. Most of the reflected scattered light is of the same wavelength as the original incident light, however some (<10-5%) suffers a wavelength shift due to interaction with the specimen, specifically with the bonds in the material. Unlike the HR-EBSD method, Raman spectroscopy can only be used to measure uniaxial stress.

Silicon disk specimens 35mm diameter and 3mm thick with parallel sides of (001) orientation were indented with a diamond linear wedge indenter with a peak load of 350mN (Fig. 1). The long axis of the indenter was 20 μm and scan lines used for both the HR-EBSD and CRM methods were made at right angles to the indent. The wedge indenter penetrated the Si disk to a depth of 530nm with a final residual impression depth of 160nm.

The EBSD pattern data was acquired using a 30kV accelerating voltage and probe current of 3 nA (measured with a Faraday cup). The electron probe diameter was about 2nm and linear scans across the centre of the elongated indentation were 200nm step size and consisted of 400 points (patterns generated). The EBSD patterns were processed using the BLG‐Vantage CrossCourt3 software package. For the CRM data collection a scanning Raman imaging system was used to acquire a Raman spectrum at each point along the scan line across the wedge indentation with a step size of 120nm. Stress maps were also acquired over the full x-y area shown in Figure 1. The position of the Raman peak was compared to that of the stress-­‐free reference area and the shift was determined at each point. Raman allows multiple wavelengths to be used for the measurements. This provides an insight into the residual stress depth profile as the different wavelengths penetrate to different depths below the sample surface.

Figure 2 is a plot of the probe position and calculated stress across an indentation for both the EBSD and CRM data sets. The observed discontinuity in Figure 2 is a result of the actual information gap at the 530nm deep indentation. The two normal stresses as determined by EBSD, σxx and σyy indicate that the stress parallel to the indentation σyy is close to zero away from the indent, and increases only by a small amount close to the indent. The stress created by the indentation can therefore be considered as uniaxial and the comparison of the σxx stress can be compared directly between the two methods.

For the stress in the X-direction (σxx) normal to the indent, the EBSD value is about an order of magnitude greater than the σyy stress and indicates that the stress state is essentially uniaxial. Perhaps more importantly for a comparison of the 2 methods, as the depth of penetration of the Raman probe is decreased (λ=488nm), the agreement with the EBSD near surface information improves. Furthermore, as the two methods probe further from the indentation, the agreement is even better. 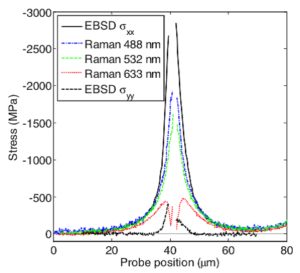 Both EBSD and confocal Raman methods allow measurement of stresses as small as 10MPa in silicon with spatial resolutions of 10nm and 100nm, respectively. Comparison of the measured stresses from EBSD and confocal Raman methods was possible due to the simple nature of the stress fields developed in the silicon indent structure. The EBSD method allows determination of the strain tensor and rigid body rotations directly from the diffraction patterns. The speed of analysis is similar, although CRM can be carried out in air while the EBSD method requires a vacuum. CRM probes the subsurface depending on wavelength of the incident light, while the HR‐EBSD method samples only the surface.

BLGVantage specializes in the development of software tools for high resolution ebsd in the field of materials science. We are interested in looking deeper into the data ebsd provides us. Our team includes scientists and software developers based in the Europe, North America and Asia.

We can be reached via email at info@blgvantage.com